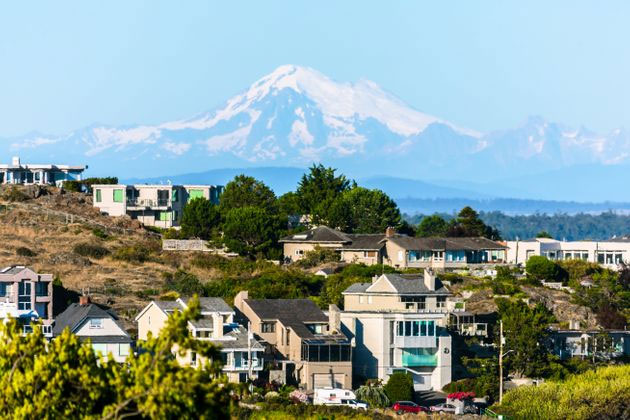 Single-family homes in Victoria, B.C., with Mount Baker, in Washington state, in the background. A large majority of British Columbians would back a ban on foreign buyers.
Support for a ban cuts across all demographics, Research Co. says.

The vast majority of British Columbians would follow in New Zealand’s footsteps and ban most foreigners from buying homes in Canada, a new poll from Research Co. finds.

In an online survey of 800 adults in British Columbia, 78 per cent of respondents said they were in favour of a New Zealand-style ban on foreign buyers, while 15 per cent opposed the idea and 7 per cent were undecided.

“The notion of forbidding most foreigners from owning real estate in Canada is popular among all demographics in British Columbia,” Research Co. president Mario Canseco said in a statement.

Canseco said the highest support came from Vancouver Island residents and those aged 35 to 54, with 88 per cent support among both groups.

An influx of foreign buyers has been one of the most commonly cited reasons for Vancouver’s high house prices. The metro area typically ranks among one of the three least affordable housing markets in a survey of hundreds of cities around the world.

New Zealand, which has struggled with similar affordability issues as Canada’s larger cities, moved in 2018 to forbid foreigners from buying residential real estate. The law exempts citizens of Australia and Singapore, because of free trade agreements.

But though the debate has focused recently on New Zealand’s move, many countries around the world limit the ability of non-residents or non-citizens to purchase housing.

Australia moved several years ago to limit foreign buyers to newly-built properties. Switzerland ― a popular destination for the world’s rich ― sets quotas for foreign home buyers, and those can vary from one canton (county) to another.

Mexico forbids foreigners from owning land in specially designated zones, which include many of the most popular seaside areas of the country. Malaysia limits foreign buying with a minimum purchase price for foreigners.

A number of other countries limit foreign buyers to condos, and sometimes limit the number of foreign condo owners in a building.

Vancouver saw years of rapid house price growth that came to an end around 2016, when the province introduced a 15-per-cent foreign buyers’ tax that temporarily took the wind out of the markets’ sails. The province hiked that tax to 20 per cent in 2018, when home sales again began to accelerate.

As in all parts of Canada, home sales tanked in B.C. during the COVID-19 lockdown, but prices have remained steady.

Though sales were down 42.5 per cent in May from a year earlier, the average resale price was up 3.2 per cent from a year ago, at $728,898, the British Columbia Real Estate Association reported.

The Research Co. poll found widespread support for a variety of moves the province and city of Vancouver have made over the past few years to improve affordability, including the increase to the foreign buyers’ tax, as well as the “vacant home tax” on unused properties and a new tax on properties valued above $3 million. All got the support of at least three-quarters of respondents.