B.C. real estate faces COVID-19 slump. But how deep and for how long? 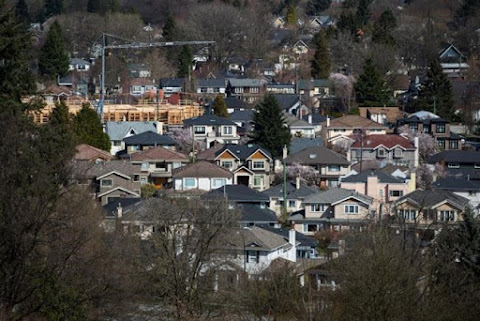 British Columbia’s real estate market is bracing for a major hit from the COVID-19 pandemic, but experts are split on how serious the downturn will be.

The B.C. Real Estate Association is predicting the pandemic will cause an initial deep recession leading to sharp decline in home sales, but a rebound by next summer driven by pent-up demand if the pandemic has not dragged on too long.

The consequences of a major real estate slowdown could be pronounced.

The B.C. government’s 2020-2021 budget envisioned about $1.6 billion in revenue from the property transfer tax, and the real estate sector, which employs tens of thousands of people, is worth more than $22 billion annually to the province’s GDP, according to the industry non-profit, the Urban Development Institute.

Signs of trouble are already appearing in Metro Vancouver, which put up reasonably strong home sales in March that have since dropped off sharply — despite April traditionally being one of the hottest months of the year.

Economist Tom Davidoff with UBC’s Sauder School of Business said Metro Vancouver’s market had been building up to a strong spring after a several-year slump, when the pandemic hit.

While sales have slowed, he said prices have remained sticky — so far.

“Unlike the stock market, we haven’t seen panic-selling in the Vancouver real estate market, so prices have remained steady,” Davidoff said.

Further complicating the picture are the pandemic’s complex effects on industry financing.

Cameron McNeill, a partner with Vancouver real estate marketing firm MLA Canada Ltd., said that while construction is visibly continuing on existing projects, most of those units are already sold.

But he said a noticeable decrease in presale activity means developers won’t have the resources or the incentive to break ground on new projects, cutting off future supply.

The mortgage picture has also changed. The Bank of Canada has lowered its overnight lending rate, but banks have actually hiked rates on fixed-term mortgages.

“They’re expecting that there will be a few defaults, and a few people that won’t be able to afford their mortgage payments after this pandemic and after that six-month deferral program,” said Yam.

About 20 per cent of his clients are investors sitting on the sidelines, he said, waiting for homeowners to panic.

“When people realize the end is not in sight, and this could last for a few months to a year, people will start to get a little worried,” he said.

“I know that there are investors waiting for that to happen, when they smell the blood they will start picking up some of those properties, but they’re just waiting.”

“It can’t slow down forever, because I think some people are going to have to sell,” he said.

“If we have a prolonged downturn in the economy, it’s very unlikely to me that people who have great businesses and are starved for cash aren’t going to find it attractive to sell a home to finance those other investments that are cash-short.”

McNeill, on the other hand, predicted a pricing trend more in line with the real estate association: A short-term slowdown with a rebound in 2021.

“In the medium- to the long-term, there’s going to be incredible forces still bringing population to the city, and we just don’t have the housing supply in order to be able to satisfy that need.