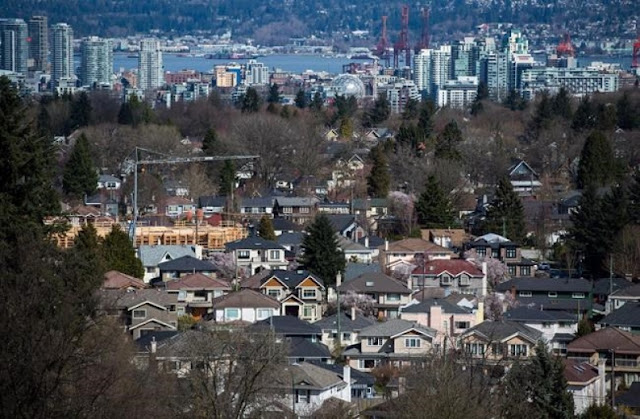 VICTORIA — The British Columbia government ended its fiscal year with an operating surplus of $1.5 billion as the province collected more revenue from taxation and less money from a softening real estate market.


The 2018-19 public accounts released Thursday by Finance Minister Carole James show that the surplus was some $1.3 billion higher than anticipated, driven by $2.9 billion in increased revenue primarily from personal and corporate income taxes.
James said she was not concerned about a $315-million reduction in property transfer tax revenue. She said the previous Liberal government relied on an out-of-control real estate market to grow resources while her NDP government has a long-term economic plan.


"In fact, my bigger worry that I certainly had coming in as finance minister, is the worry of running an economy based on a speculative real estate market and skyrocketing housing prices, which meant that people couldn't build their lives here in British Columbia," she said.
"That's part of the reason that we're investing, as you can see, in education, in child care, in making sure that we have people who are able to get back into the workforce and that families have opportunities here, because we believe that'll create the long-term sustainable growth that we need."


James said the increased revenue reflected economic growth, household income growth and higher income tax assessments, not just government intervention. But the province also raked in millions from new taxes, including the employer health tax which brought in $415 million.
The public accounts also revealed that the province has eliminated its operating debt for the first time in 40 years and that the taxpayer-supported debt-to-gross domestic product ratio is 14.5 per cent, the lowest it has been in a decade.
James said her budget in 2018 put B.C. on a different path with record investments of $1 billion for child care and $7 billion for affordable housing.
Her government has also chosen to confront financial challenges at the Insurance Corporation of British Columbia and BC Hydro, and both Crown corporations are now on a more sustainable path, she said.
"ICBC is still running at a loss, but we are starting to see some small improvements, although a great deal of work still needs to happen," she said.
B.C.'s economy grew by an estimated 2.4 per cent in the 2018 calendar year, the third highest rate in the country, led by goods-producing industries with notable gains in mining, oil and gas extraction, construction and manufacturing, the public accounts showed.
B.C. had the lowest unemployment rate in Canada at 4.7 per cent in 2018, down from 5.1 per cent the year before. Wage and salary growth also led the country at 5.9 per cent in 2018.
Shirley Bond, finance co-critic for the Opposition Liberals, said the government's numerous new or increased taxes are having a devastating impact on British Columbians while their government refuses to lay out an economic or jobs plan.
"The NDP government's primary source of revenue continues to be the pockets of taxpayers," she said in a statement.
Bond, who represents the riding of Prince George-Valemount, noted the public accounts reflect last year's numbers and there are serious concerns about economic challenges ahead. Revenues were largely driven by federal transfers which are expected to go down next year, she said, adding that the public auto insurer lost $1.2 billion.
The government's "failed" tax policies are beginning to drive B.C.'s competitiveness backwards, said Liberal finance co-critic Tracy Redies.
"As our housing sector struggles, with housing starts down and construction projects coming to a halt, and businesses continue to raise alarm bells about the province's deteriorating competitiveness, the NDP clearly has no plan for our economy and how to ensure it can provide hard-working British Columbians the opportunities they deserve."
— By Laura Kane in Vancouver.