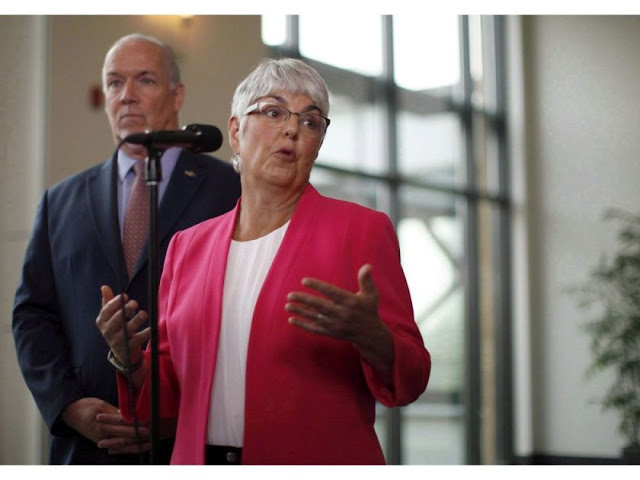 VICTORIA — Provincial politicians are getting larger pay raises this year than nurses, social workers and hundreds of thousands of public servants who signed new contracts with a government that argued it didn’t have the money to pay them higher salaries.
MLA salaries increased 2.7 per cent on April 1, to $111,025.
Meanwhile, more than 200,000 public-sector employees will only see a wage increase of two per cent this year, as part of new collective agreements signed with an NDP government that insisted it was unaffordable to pay them more.
MLAs are exempt from wage guidelines that apply to other public-sector workers. Instead, their annual pay increase is indexed to inflation. That increase amounts to an extra $2,919 this year.
The news did not go over well with representatives of other public-sector workers, most notably the B.C. Teachers’ Federation, which is still in bargaining talks.
“I don’t begrudge people from getting a wage increase, but when the bosses are getting an increase that isn’t being offered to the workers, that’s a real problem,” said president Glen Hansman. “If it comes to a general wage increase, if that’s what the rate of inflation is, then workers in the public and private sector shouldn’t be made to feel ashamed for asking for similar things.”
The government, however, has declared it unaffordable to offer anything more than a two-per-cent annual increase to unionized health care workers, social workers, corrections staff, Indigenous services employees and other civil servants who have negotiated new three-year deals.
Finance Minister Carole James has said the balanced budget can only be maintained under what is called the “sustainable services negotiating mandate.” Her ministry has described it as about “balancing the need for fair and reasonable wage increases with outcomes that are affordable and managed within the fiscal plan.” Every one-per-cent increase for public-sector employees costs government approximately $304 million a year.
James on Wednesday defended the discrepancy between pay for MLAs and those for public-sector unions.
“You are talking about one year versus three years,” James said in an interview.
“You also have to look at the supports for the programs and services that are there. If I look at the amount of dollars and resources that we put into public services, if I look at the support we put into child care, into education into the areas of work, we’re not only improving the wages we’re improving the working conditions and the supports for the people who work in the system.
“So you have to look at the whole picture.”
The contracts already signed with unions like the B.C. Government and Services Employees’ Union contain “me-too” clauses that allow their wages to increase if another union negotiates a richer deal. But the me-too clauses are not linked to MLA salaries.
The BCTF has been arguing for higher wages to help recruit much-needed teachers from other provinces. In the past, the union has tabled proposals that included cost of living indexes without success, said Hansman.
“Between the MLAs’ inflation-indexed wages and then the incredible benefits and pension plan they have for them, I’m wondering if they themselves are kind of looking at that disconnect,” said Hansman. “I think they that they are.
“We’re living in the very same communities, our homes are side by side, and these folks knock on our doors and ask for our support during election times, and these are the kinds of things that need to be examined.”
MLAs chose to link their pay to automatic cost-of-inflation increases after a disagreement over a 29-per-cent raise and pension improvement in 2007 that pitted the NDP and Liberals against each other and led to accusations of political motivations.
James, who was at the centre of that dispute as then-Opposition NDP leader, said Wednesday she still believes having MLA pay independently linked to inflation is the best way to handle the issue.
rshaw@postmedia.com
twitter.com/robshaw_vansun