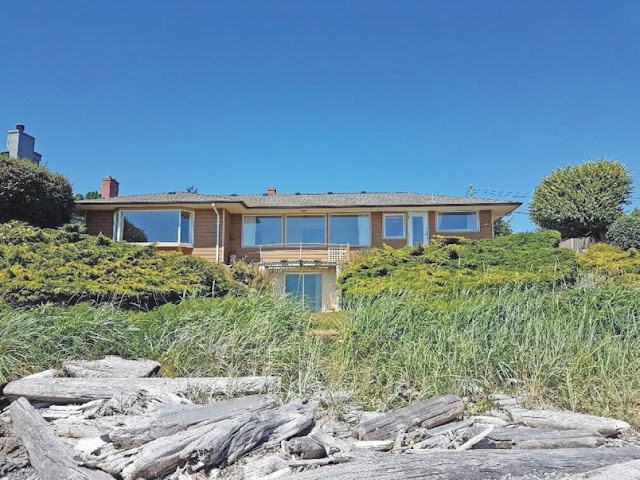 It’s a bit like having a baby.
You nervously anticipate the delivery date. You know the package will arrive at dawn after hours of hard labour, and when it finally appears, it is fully formed and ready for loving care.
But this is not a baby.
This remarkable delivery involves an entire house and it arrives thanks to the delivery crew of Nickel Bros., a company that has been giving new life to homes for more than half a century.
Emilie and Charles Worthington, who live in Cowichan Bay, just paid $5,000 for a heritage home on Newport Avenue that will soon be trucked and barged to a holding site near Pat Bay. It will remain there for up to six months, before moving again once the young couple find a lot to put it on.
“Now we have a wonderful house and just need a property to move it to. That’s the complicated part.”


Her husband, 42, is a pilot and they hope to move the home close to Victoria International Airport.
Emilie says she has learned there are loads of perfectly good, very attractive houses going to waste. “This one is stunning, with five bedrooms, three bathrooms and the kind of character you can’t replicate. We love the scale, the layout and its newly remodelled kitchen with an Aga stove.”
Moving the house will cost approximately $275,000, because it involves almost two full moves (one to the storage site, one to the final destination) and it is two storeys tall, which adds costs for avoiding wires and other challenges.
The new owners will also have to create a foundation, rebuild the chimneys (taken down for the move) and do some renovations, but that price will still be a fraction of what it would cost to build this unique home from the ground up.
“If we wanted to build it today, it would cost around a million,” Emilie said.


The home has 1,800 feet on the main floor and 1,100 upstairs, and they’re considering adding a basement.
“Several of our friends spent a lot of money building homes and they didn’t turn out to be everything they wanted. This way, we know exactly what we’re getting: an architecturally interesting, very appealing house.”
The 1913 home was designed by P.L. James, a colleague of Francis Rattenbury who collaborated with him on various projects, including the Crystal Gardens and CPR Steamship terminal.
It would have been a tragedy to demolish it, Emilie said. “A lot of people today have very deep pockets and buy a place because they like the land, then want a completely different style house.”
She is from Quebec originally and her husband is from England, where she said people revere old homes and try to retain centuries-old architecture.
Brittany and Harold Neden, ages 27 and 28, feel the same way and are awaiting delivery of a roomy, custom rancher that currently sits on Waring Road on the Cordova Bay waterfront.


“We got it for free, because the owners want to build a mansion there,” said Brittany.
Harold’s uncle moved houses in the past, so they are familiar with the concept. “The idea just grew on us because you can’t get a house built like this anymore.
The single storey, 2,100-square foot home was built in 1959 — “It has two-by-10 joists and beautiful wood floors,” she said — and will be relocated to the couple’s six hectares near Qualicum.
“Nickel Bros. have just started tearing apart the ground floor to put jacks under the house… Then they’ll slide it down the beach at high tide and onto a barge.”
The house is 38 feet at its widest and the garage has to be cut off and left behind for demolition.
She said it took a month to “get all our ducks in a row.”
“We’ve been working hard at this end to get permits, prepare the septic field, clear small trees, to widen about 250 metres of our unmaintained road.
“Getting a permit for that was not a problem, but it’s been a big job and we are not completely done cutting back yet.”
Her husband is a heavy-duty mechanic and they have an excavator, tractor and backhoe, so they can do most of the site preparation themselves.
Moving their house will cost a little more than $125,000 and they also plan to add a full basement, which will bring the square footage up to about 4,200.
“If we were to build a house that big, we’d be looking at $400,000 at least, even if we did most of the work ourselves.”
Sarah Crabtree also hopes to save a bundle.

She has a lot near the water on Gabriola Island and plans to soon move a beautiful Arts and Crafts-style home there from St. Patrick Street in Oak Bay.
The classic 1920s home has been well cared for and updated, and moving the 2,700-square foot house will cost about $175,000.
“We were originally looking at building something on Gabriola, but then discovered the wonderful world of Nickel Bros.,” Crabtree said.
“These guys are incredible and really, really nice.”
She found the perfect house and is now awaiting permission from Parks Canada to lift it up and over a narrow slice of parkland between her property and the beach. The barge ramp, at high tide, will span the strip, so there will be no impact on the parkland.
That will save a long trucking journey, the cost of lowering wires and having to cut the roof off.
“My family supports this idea of moving homes because it’s so environmentally responsible and inexpensive,” Crabtree said. “This is the kind of house that we average citizens could never afford to buy normally.”
She said their initial plan to build a 1,500-square foot cottage would have cost about $350,000, “so the incredible thing is, this is half the price for twice the house — and it’s a sustainable choice. We are not demolishing a beautiful home.
“I can’t tell you how thrilling this is for us. We really feel we are doing the right thing.”
- - -
This is the first in a two-part series looking at salvaging and reusing houses.
Next Saturday in House Beautiful, we talk to Nickel Bros., which began in Manitoba and moved to the B.C. coast in 1956. Since then, it has lifted, trucked and barged tens of thousands of buildings, ranging from charming Oak Bay heritage homes to multi-tonne apartment buildings.
As demolition costs go through the roof, construction bills rocket skyward and concerns about waste rise, house moving has becoming an eco-friendly choice — but there are challenges.
We look into both the technology and politics of house-moving — why physical barriers prevent half the houses Nickel Bros. hears about from being moved, while another 25 per cent can’t be removed in time because of the rush to demolish.
“This is a problem of affluence,” says Jimmy Connelly, manager of sales and estimating for Nickel Bros. on South Vancouver Island. “We are throwing away structurally sound, perfectly good, high-quality homes. It’s a huge waste of resources.” 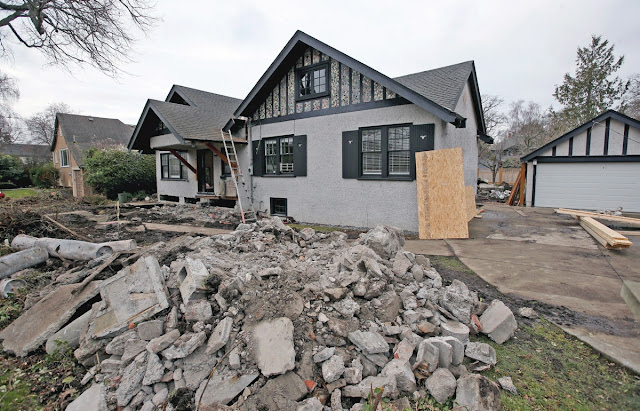 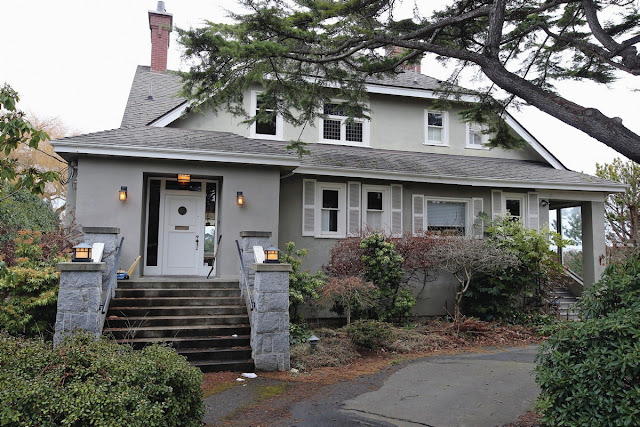