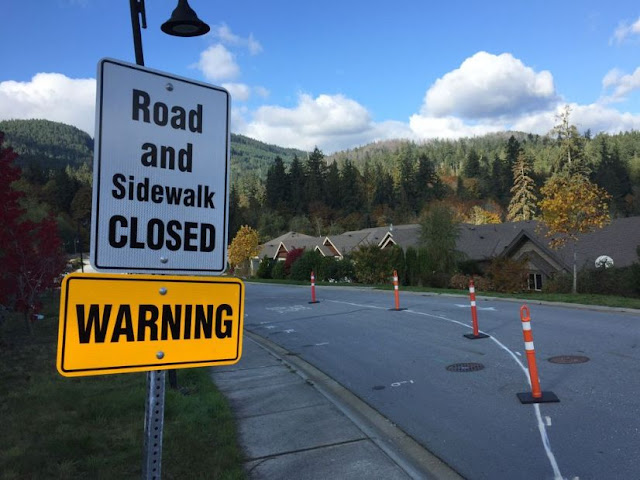 Residents of an upscale neighbourhood on the Sunshine Coast will officially be barred from returning to their dream homes today.
SECHELT — Greg and Gerry Latham spent Friday morning scrambling to pack up family heirlooms as a series of sinkholes threatened to destroy their dream retirement home on British Columbia’s Sunshine Coast.
The Lathams are among 14 families in an upscale seaside neighbourhood in Sechelt preparing to obey an evacuation order and they said they didn’t know if they would be allowed to return.
“I’m standing in my beautiful home that has absolutely no furniture in it, looking out at the view, the eagles flying by,” Gerry Latham said through tears.
“I’m just trying to figure out what to leave behind.”
Although the sinkhole risk was documented before most of the homes were built, the Lathams said they weren’t told about the problem before buying. The situation has sparked lawsuits from several residents.
Sinkholes throughout the Seawatch subdivision prompted the District of Sechelt to order the evacuation and declare a state of emergency due to “imminent threat to life” on Friday afternoon, following an evacuation alert last week.
The homes, with views overlooking Sechelt Inlet, are similar to others in a nearby subdivision valued at over $1 million, although the BC Assessment Authority values most of the buildings in the Seawatch subdivision at zero.
An engineering report issued to the district Feb. 7 says future sinkholes or landslides within the subdivision could damage infrastructure or buildings, and injury or death are possible consequences.
A statement issued by the district says Concordia Seawatch Ltd. built and sold the subdivision despite engineering reports as early as 2006 describing the development of sinkholes.
“The Seawatch subdivision was designed, built, marketed, and sold by a private company. The District of Sechelt cannot accept the argument that when a private sector venture falters, the cost should be borne by the Sechelt taxpayers,” the statement said.
Ron Davis of the Concordia Group of Companies said in an emailed statement that the developer “has great concern and compassion for the homeowners and families that are now being required to leave their homes.
“As the developer and others are currently involved in civil litigation relating to the Seawatch Development, we are not providing further comment at this time,” he said.
After buying the property in 2004, Concordia submitted a geotechnical report before development began, then provided letters of assurance signed by several engineers certifying proper construction of the roads, water and sewer lines, the district said.
It said Concordia’s geotechnical engineer issued a report in 2006 documenting sinkholes that had developed and setting out how the infrastructure should be designed.
The company was required to register a restrictive covenant against title to all of the subdivided lots, the district said.
“This means each property owner should have been aware of the geotechnical attributes of the land,” it said.
The first major sinkhole to appear after residents moved in was in June 2012. In February 2015, another large sinkhole damaged a home, forcing the owners to move out.
The Lathams’ street began deteriorating early last year, leading to a road closure. The most recent sinkhole appeared on Christmas Day and was 400 cubic metres in size and 25 metres deep, but it was immediately filled in by the company, the district said.
“There is a very high probability of at least one sinkhole collapse each year based on the recent history of the site,” an engineering report to the district says.
Several homeowners have launched lawsuits against the district, Concordia, its contractor, engineering firms, the home warranty provider and real estate agents. Some lawsuits have been dropped but two owners have ongoing litigation, the district said. A trial is set for March 23, 2020.
The district’s statement says the most comprehensive solution to the problem would involve drilling wells, continuous pumping to remove groundwater, partial infrastructure replacement and repairing roads. But it says that would cost $10 million based on a 2015 estimate and the district cannot afford it without a referendum to raise property taxes immediately by 8.5 per cent.
The provincial government will not offer assistance because the situation does not qualify under the emergency response program, the statement says.
Despite early reports about the sinkhole risk, the Lathams said it was never disclosed to them by real estate agents, the developer, the district or the lawyer who conducted a title search for them.
The couple said they can’t afford to enter the lawsuit, which has cost their neighbours $400,000 over four years.
The Lathams said they fear they’ve lost the $1 million plus $250,000 in improvements they sank into what they thought would be their retirement home. They’re now preparing to move into a 1,000-square-foot rental.
“There’s been a lot of comments coming back to us saying, ’Well you should have done your due diligence, you should have known better.’ People who live on the Sunshine Coast, who have lived here their entire lives, say, ’Well we could have told you that,’ ” Gerry Latham said.
None of the residents of the subdivision lived on the coast until they moved there, she said. The Lathams moved from Vancouver and she said they went through the same process as any other home they’ve purchased in their lives.
“Where we erred, in my mind, was we trusted. We trusted the developer and the district that they were selling us a piece of property that had no issues,” she said.