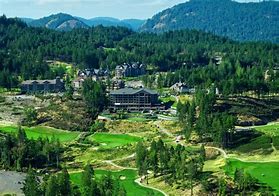 Despite Langford mayor Stew Young getting Bear Mountain rezoned as a resort community, province says municipalities can’t pick and choose areas that won’t pay tax
Langford Mayor Stew Young and Bear Mountain chief financial officer David Clarke decided to re-zone Bear Mountain as a resort in oreder to be exempt from the speculation tax, but the province said it doesn’t work that way.
Young said the goal was to designate Bear Mountain as a resort area so, like Whistler, it wouldn’t be affected by the province’s speculation tax.
“We said look, at least get Bear Mountain out right now because that’s where my jobs are,” Young said. “My staff agreed to meet with ministry staff and find a way for Bear Mountain to be a resort and have the same designation as Whistler.”
Clarke said he had meetings with provincial representatives about the matter as well, and was able to confirm that Bear Mountain was re-zoned as a resort for this purpose.
READ MORE: Langford mayor says City threatened during meeting over speculation tax
However, a spokesperson from the Premier’s Office said Bear Mountain does not qualify for an exemption the same way Whistler does, because Whistler is a standalone resort municipality, whereas Bear Mountain is still part of Langford.
“Municipalities cannot remove sub-sections of the Speculation Vacancy Tax area, such as the request to remove Bear Mountain,” said Jen Holmwood, deputy communications director with the Office of the Premier. “It would not be appropriate for any city to pick and choose which neighbourhoods or corporate developments the tax applies to.”
Holmwood said the speculation tax applies to the largest urban centres in B.C. that have the most significant housing affordability challenges. She said Langford has been “severely impacted by the housing crisis” with rental vacancy rates of 0.7 per cent for the West Shore, according to the Canada Mortgage Housing Corporation.
For three-bedroom family homes the vacancy rate is zero.
Holmwood said Langford has also seen assessment price hikes of 21 per cent in the last year and a 51 per cent increase in the benchmark price of a home in the last five years.
“Our government’s focus is on ensuring that all British Columbians can afford a place to call home,” Holmwood said. “We are turning vacant properties into homes for people to actually live in.”
Young has been outspoken about his opposition to the tax and last week, said he will continue to fight it.
“This is a resort community,” Young said about Bear Mountain. “It’s good for Langford…it’s a big employer…Langford gets good taxes out of it…I have to fight for that.”
Homeowners in Greater Victoria will be able to apply to opt out of the speculation tax and will be receiving instructions in the mail from the province on how to do so.
According to the province, the speculation tax is supposed to target foreign and domestic speculators who own residences in B.C. but don’t pay taxes in the province.
shalu.mehta@goldstreamgazette.com