Green Party leader Andrew Weaver says a new election will be “imminent” if the B.C. Liberals win the Jan. 30 byelection in Nanaimo. 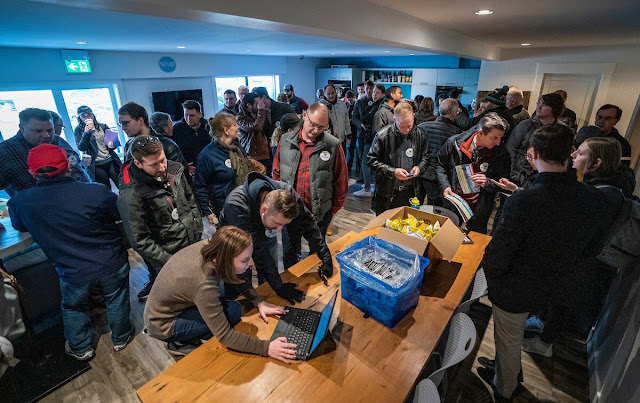 Green Party leader Andrew Weaver says a new election will be “imminent” if the B.C. Liberals win the Jan. 30 byelection in Nanaimo.
Weaver has been campaigning for his party in the riding and posted a long note on his Facebook page with his thoughts after meeting with voters.
“If the B.C. Liberals win the byelection in Nanaimo, the legislature would simply not function, and a new provincial election would be imminent,” Weaver wrote on his Facebook page.
“It’s clear from the overwhelming majority of people I have spoken with that nobody wants an early election.”
The Nanaimo byelection is critical for the NDP government. If the Liberals win the seat, it would mean 40 NDP seats, three Green seats and 43 Liberal seats, with Independent speaker Darryl Plecas required to break ties in the legislature.
Legislative convention would mean that Plecas would vote with the government during confidence votes. But the NDP could be in trouble if any Green or NDP MLAs were sick or if they wanted to pass fractious legislation.
Former MP Sheila Malcolmson is running for the NDP, Tony Harris for the Liberals and Michele Ney for the B.C. Greens.
Weaver says the sense he got after knocking on doors for four days in Nanaimo is that NDP support is “tepid at best.”
“Residents of Nanaimo are troubled that Sheila Malcolmson is not from the riding, nor does she have deep roots in the community,” wrote Weaver.
“More importantly, residents are profoundly troubled by the fact that she has bailed on her constituents in an apparently opportunistic quest for power to run provincially, thereby forcing a federal byelection.”
The federal byelection has not yet been called in Nanaimo-Ladysmith. Elections Canada says it must be called by July 6, but Prime Minister Justin Trudeau could decide to set the date at the same time as the federal election. That would save Elections Canada the cost of additional resources for administering a byelection.
“But here is the B.C. NDP talking point that has literally caused me to burst out laughing on the doorstep. The B.C. NDP have been arguing that ‘a vote for the Greens will split the vote and lead to the B.C. Liberals getting in,'” Weaver wrote.
“Let’s not forget that the B.C. NDP are governing only with the support of the B.C. Greens. It’s hubris for the B.C. NDP to suggest that they will have ongoing stability in governance if the B.C. Greens lose.”
The byelection was triggered when Leonard Krog resigned to serve as Nanaimo’s mayor.
Weaver also launched into a familiar attack to explain why he believed Nanaimo voters shouldn’t vote for the Liberals. The Green leader says the party still needs a “timeout” and that “nobody quite knows what they stand for.”
“The ONLY way to ensure stability and accountability in the B.C. legislature is to elect Michele Ney of the B.C. Greens,” Weaver wrote. “A vote for the B.C. Liberals will ensure accountability, yet instability. A vote for the B.C. NDP will ensure instability and no accountability.”
Speaking to CHNL’s Shane Woodford on Monday, B.C. Premier John Horgan was not so quick to jump to the conclusion that a Liberal win would trigger an election, but he did fire back at both the Liberals and the Greens.
“There are other candidates whose parents were apparently famous in the past, and they now somehow are the same equivalency as someone who’s served the public for decades. But I think we’re going to do the best we can in Nanaimo,” Horgan told Woodford.
Horgan added that the Liberals lack credibility on issues like ICBC, the public insurer that has lost $1.3 billion in the last fiscal year. The premier said a Green MLA in Nanaimo would still work for his government but wouldn’t be as good as an NDP one.
“All things being equal, I think the people of Nanaimo, who have historically supported New Democrats, are going to look at a government that’s finally paying attention to the issues that matter to them, and they’re going to vote in the affirmative to keep the government going,” Horgan said.
“Whether that be a Green MLA or a New Democrat MLA, I think the objectives are the same. We don’t want 16 years of Liberals again. That didn’t accomplish much in Nanaimo, and that’s why there’s so much work to do.”
B.C. Liberal leader Andrew Wilkinson also spent the weekend in Nanaimo campaigning with Harris, his party’s candidate.