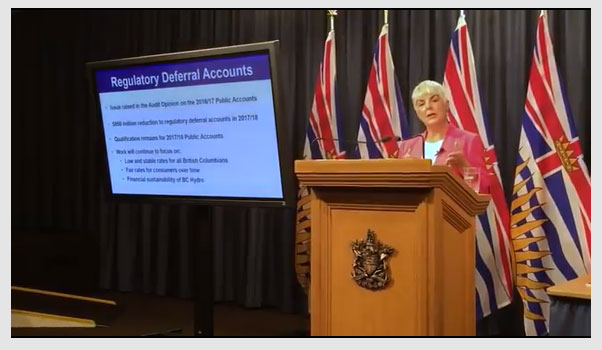 B.C. maintained its budget surplus in the last fiscal year even though it boosted spending on government programs by almost $3 billion and covered significant expenses from disastrous wildfires in 2017.

VICTORIA — Record revenue from B.C.’s real estate sector has helped the provincial government balance its budget yet again, though it may be the last time the housing sector delivers such a surprise cash windfall to the provincial treasury.
The property transfer tax accounted for more than $2.1 billion in revenue for the 2017/18 fiscal year ending March 31, according to government’s public accounts released Tuesday.
That’s $266 million more than government was expecting. It also includes extra revenue generated after Feb. 21 when government expanded the foreign buyer tax to 20 per cent and increased property transfer taxes on homes valued at more than $3 million.
Home sale taxes have proven a major cash cow for the government in recent years during B.C.’s red hot real estate market. The property transfer tax reached a record amount of revenue in Tuesday’s public accounts, and has grown 128 per cent since 2014.
The extra money was a factor in allowing Finance Minister Carole James to eek out a $301 million surplus in the year-end financial figures on a $51.7 billion budget.
But James acknowledged a softening housing market, as well as the NDP’s planned speculation tax, was driving down sales, prices and the property transfer tax revenue that the province has relied upon in the past.
“We want the market to moderate, we’ve been very clear about that,” she said. “We think that’s important not only for families and affordability but for our economy.
“Do I expect that there may be some change in the money that’s coming in? Yes I do.”
New figures on the slowdown will be released in September as part of the quarterly update to the current year’s 2018/19 budget.
Home sales in Metro Vancouver in July were at their lowest level in 18 years, and some realtors believe a significant decline in prices is quietly occurring in the market.
“Obviously we’re coming off the boil from the housing real estate boom,” said Jock Finlayson, executive vice-president for the Business Council of B.C.
“That’s clearly an area where the slowdown is very much in evidence in the Lower Mainland, and to some extent in the province, in sales activity. It’s going to pinch the government’s revenues for sure. Some of that I think they factored in their budget in February. The question is whether what’s happening now is a bigger downtown than what was predicted in the budget.”
James said she’s concerned the previous Liberal government relied too heavily on housing profits as its economic plan. However, her own budget for the current 2018/19 fiscal year also predicts a slight growth in property transfer tax revenue, to $2.2 billion.
“It concerns me that we don’t have a long-term stable plan for economic growth in British Columbia if we’re simply relying on money coming in on a speculative market,” said James. “That’s then causing problems for families, individuals, tenants, homeowners, businesses, recruitment and retention.”
The year-end financial figures showed a $1.3-billion loss by the Insurance Corp. of B.C., which the NDP has attempted to plug by instituting a cap on pain and suffering claims for minor injuries and an overhaul of insurance penalties for bad drivers.
James said the government also made a $950-million “adjustment” to its finances to address concerns independent Auditor General Carol Bellringer made about B.C. Hydro’s use of deferral accounts that push off expenses into future years. Hydro has $4.5 billion in deferral accounts remaining even after the change. The dispute with the auditor over Hydro’s finances delayed the release of public accounts by more than a month.
James blamed the Liberals for years of siphoning away dividends from Hydro, and said her government was trying to reduce the liability Hydro faces by addressing some of the problems now as it conducts a review of Hydro’s operations.
Liberal MLA Tracy Redies, a former B.C. Hydro board member, defended the use of deferral accounts. “This seems to be another contrived way of the NDP trying to make the previous government look bad,” she said. “I think it’s really wrong because deferral accounting is the standard practice used by utilities across North America.”
Other factors in the annual surplus included increased revenue from federal transfers, natural resources, liquor sales and other tax measures like the provincial sales tax.
Spending pressures were last year’s record wildfire costs of more than $560 million, as well more than $3 billion in new NDP spending on health care, education and social services.
The government absorbed $3.5 billion in debt from cancelling the tolls on the Port Mann Bridge, forcing the bridge to become a taxpayer-supported liability. Nonetheless, government actually decreased total provincial debt by $918 million and reduced its debt-to-GDP ratio to 15.6 per cent.
“Generally, B.C. is in reasonable shape,” said Finlayson. He said there remains “underlying fragility to the province’s finances” because it is at the peak of a larger economic cycle that may lead to a downturn and even a North American recession in the next two to three years.
rshaw@postmedia.com