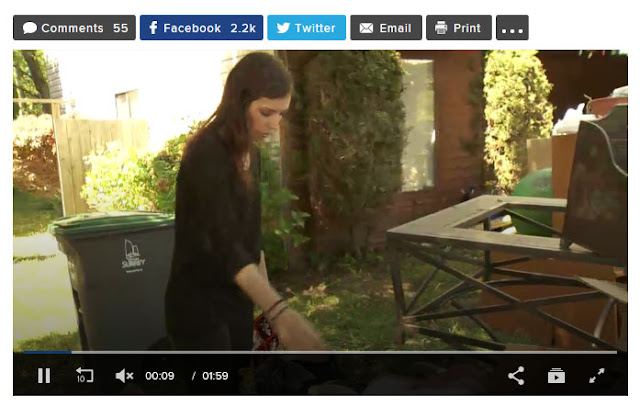 A single mother has found herself without a place to stay after being evicted from the Surrey home she lived in for years.
All of Sara Barratt’s belongings are on the front lawn and she says she hasn’t been able to find a new place for her and her son.
“It’s heartbreaking,” she said. “I’ve lived here for nine years. This is my life sitting on the front lawn and now crows are picking through it.
“Unfortunately, I couldn’t find anything in the time frame that I had because the housing crisis is out of this world.”


Barratt said four months ago her landlord told her that she may be evicted.
“In January, my landlord let me know that he would be moving his in-laws in and I would have to find different housing.”
In protest she stopped paying her rent and began to search for new housing.
“At that time I mentioned to her that it was something that might happen in the future and she may have to look for something else if that actually happens,” landlord Danny Cheung said. “I don’t know, but for whatever reason she stopped paying the rent.
“This is a pretty simple case of [her] not paying the rent.”
Cheung went to court and on May 1, bailiffs took her belongings out of the house.
Barratt says she has applied for over 180 different rental units without success, even though she has a steady job and reference letters.
“I had to suck up a lot of pride and reach out to community resources, provincial workers, anybody that could help, and they’re just so bogged down with a million stories like me,” Barratt said. “I’m just a drop in the bucket.”
In April, Surrey council approved an affordable housing plan that aims to build up to 2,000 new rental units in the next few years.


But that may not help people like Barratt.
“We have about 3,000 people on the wait list for BC Housing in Surrey, which is significant,” Surrey Coun. Vera LeFranc said. “Some people just never apply because they know that the wait list is so long, and for those who are making a decent wage they don’t actually qualify for some of the subsidies that come into the system”
For now, Barratt’s belongings remain on the front lawn and she’s not sure what will happen next.
“I worked really hard to make a life for my son,” she said. “I feel like I failed him.”