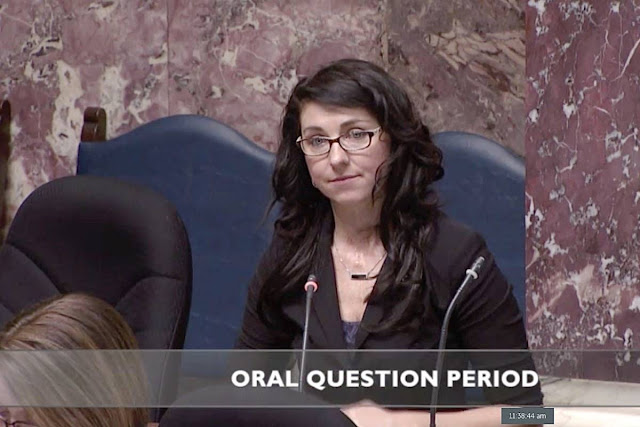 Asked whether the ministry would honour requests for exemption from the tax from the Regional District of Nanaimo and the municipality of West Kelowna, James would say only that details of the proposed legislation are still being crafted.

“As I said on budget day, we put out the principles of the tax,” James answered when Stilwell asked whether the minister would exempt communities that reject the tax. “The details are being worked on. The specifics will come out, and the legislation will be in the fall.”

Stilwell told The NEWS her office has been flooded with responses to speculation tax proposed for the Regional District of Nanaimo and she knows of people who have already not merely put their houses on the market, but sold them in response to the tax.


“We’ve got people already moving, putting their places up for sale and getting out early, because they don’t know if they’re going to be able to stay and keep their homes without this added expense,” Stilwell said. “My office is getting at least 10 new files opened every day on the speculation tax, from people rightly concerned how this is going to affect them.”

The provincial government announced the proposed tax as part of its 2018 budget, citing the need to rein in real estate speculation and reduce upward pressures on housing prices. It would add .5 per cent to the tax on property owned by non-residents in its first year and rise to two percent in the second year.

However, the speculation tax applies only to select areas of the province, including the RDN and Greater Victoria on Vancouver Island, as well as Metro Vancouver, the Regional District of Fraser Valley, and the municipalities of Kelowna and West Kelowna.

Stilwell’s questions to the Finance Minister came two days after the RDN board voted to request a blanket exemption from the legislation.

One week earlier, Parksville’s city council voted to send a letter to the ministry requesting an exemption from the speculation tax for Canadian residents, and to draft an emergency resolution to the Association of Vancouver Island Coastal Communities (AVICC) conference to request support of its member municipalities.

“Parksville is well known as a community that welcomes retirees,” Mayor Marc Lefebvre said in a written release shared by the city. “In planning to retire here, many purchase homes while still employed elsewhere in Canada. These are not rich speculators, but ordinary Canadians who are building a better life for themselves and families (and) who pay their fair share of property taxes.”

Of particular concern to the Regional District of Nanaimo board is the possibility of a competitive disadvantage due to surrounding districts being exempt from the tax.

Stilwell addressed that point in her questions to James while pressing the minister on whether she would exempt those districts that requested it.

“Ladysmith is just 10 minutes from Nanaimo Airport, at the edge of the regional district,” Stilwell told Speaker of the House Darryl Plecas. “I can tell the minister that people talking about economic development are simply talking about moving 10 minutes down the road to avoid her tax grab.

“My constituents want to know: on what basis did the minister draw her line between Nanaimo and the Cowichan Valley?”

James repeated the specifics of the tax are still being worked on, while citing comments submitted by people unable to find affordable housing in the region.