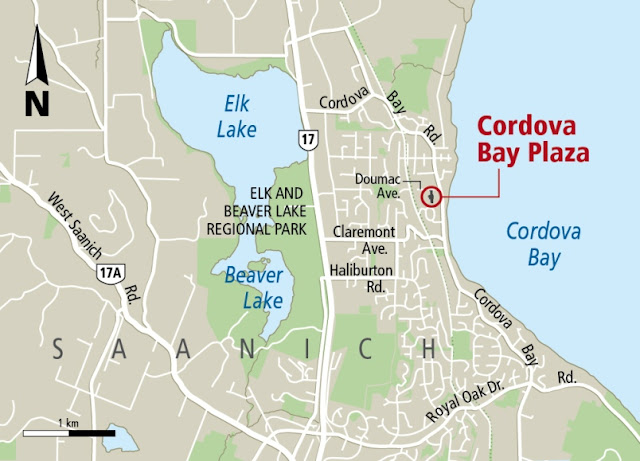 
The modern West Coast buildings with cedar siding will include 91 condos and ground-level retail space for a bank and grocery store. They will cover 36,000 square feet. The buildings will sit over an underground parkade with 324 spaces at 5120 and 5144 Cordova Bay Rd., south of Doumac Avenue.
Council voted 8-1 in favour of the development.
The 53 people who spoke at Monday night’s council meeting were about evenly split in favour and against the project.
Those against it were most concerned with height, as the area is dominated by one-storey buildings. It was for this reason that Mayor Richard Atwell was the only member of council to vote against the development approval.


The mayor said in an interview Tuesday he thinks it is time that the village is redeveloped. However, he thought the height could have been amended in light of community concerns.


“All the tenants had been moved out some time ago, and it certainly looked like a derelict site, and the development provided an attractive concept and that site needs to be developed,” Atwell said.


“My only hesitation and disappointment was there was room for staff, developers and the community and community association to go one more short round to address concerns of height at the street level, and there was some latitude for that, but I was the only one who felt that,” he said.


Former Victoria mayor Alan Lowe is the architect behind the plaza development.


The project needed and received on Monday night a development permit, as a 1998 permit allowed for only 16 condos, which were never built. The project first came to council in January 2017.


The project meets the height limitation of 15 metres and exceeds the required setback along Cordova Bay Road, according to the architect.


The plaza is almost empty following the closure of its main tenant, Tru Value Foods. The buildings on the site are one storey.


Opponents of the project, accustomed to one-storey buildings in the area, are concerned about overcrowding and want to maintain the area’s village feel.


The condos are not considered affordable housing, and councillors have accepted in past discussions that it’s necessary to accept more high-density projects to increase the available housing stock.