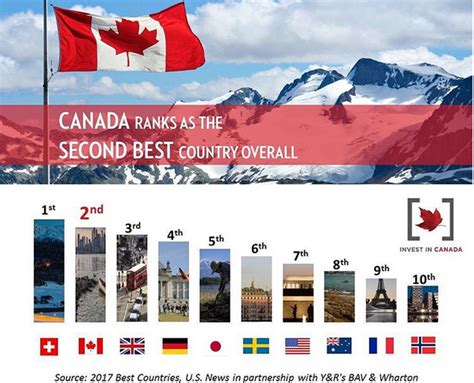 This may sound like a broken record but Canada has been named the second best country in the world yet again.
For a second year in a row, the Great White North was ranked second in the annual “Best Countries” survey from the U.S. News & World Report, in conjunction with Young & Rubicam BAV Consulting and the Wharton School of the University of Pennsylvania.
Switzerland edged out Canada for the number one ranking, scoring a perfect 10 while Canada took in 9.7 in overall scoring.
The survey evaluated 80 countries in a variety of categories including economic influence, citizenship and quality of life. The survey was conducted after the U.S. electi
“We wanted to capture how tumultuous political change can affect a country’s perceived standing in the world,” said Brian Kelly, editor and chief content officer of U.S. News, in a statement. “Similar to what we have done with hospitals, universities and other institutions, the Best Countries portal pairs fact-based metrics with storytelling to help citizens, business leaders and governments better evaluate their countries and make sense of a range of important global issues.”
Switzerland made its debut in the number one spot, knocking last year’s best country Germany down to number four on the list.
Canada ranked first in the “Quality of Life” category, scoring a perfect 10 based on a variety of sub-factors including politics, economy and health care.
The report cited Canada as being a “high-tech industrial society with a high standard of living.”
“Trade agreements in the 1980s and 1990s dramatically bolstered trade with the U.S., and now the two counties are each other’s largest trading partner,” reads a summary of Canada’s ranking. While the service sector is Canada’s biggest economic driver, the country is a significant exporter of energy, food and minerals. Canada ranks third in the world in proven oil reserves and is the world’s fifth-largest oil producer.”
The United Kingdom was again named the third best country even post-Brexit. Germany slipped to number four on the list after dipping in “three important categories: open for business, citizenship and quality of life.”
“The nation was rocked by a range of events – from growing public anxiety over an influx of refugees to a string of deadly terror attacks,” the report reads.
Rounding out the top five this year was Japan. The country moved up two spots on the ranking list from the inaugural survey. Japan excelled well in categories such as “entrepreneurship” and “cultural influence.”
Canada didn’t do so well in the “Heritage” category, scoring 2.5 overall and placing 41 in the rankings (Italy was ranked number one). As a country known for poutine, beaver tails and ketchup chips, Canada scored 0.9 in the “has great food” sub-category. We also scored 0.2 for having “a rich history” and nabbed two points for having “many cultural attractions.”
The report also noted the same concerns from last year’s survey.
“Canada faces domestic challenges related to the concerns of indigenous people and those in the predominantly French-speaking province of Quebec,” the report reads. “While constitutional guarantees allow the province wide-ranging cultural and linguistic autonomy, movements for complete independence come in waves.”
Here are the top 10 best countries in the world, according to U.S. News & World Report, BAV Consulting and Wharton School.
1. Switzerland2. Canada3. United Kingdom4. Germany5. Japan6. Sweden7. United States8. Australia9. France10. Norway