All gone: The Wade condominium development celebrates sold-out status as construction ramps up 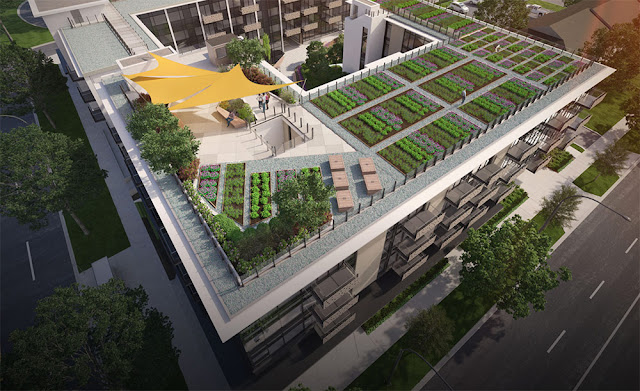 Rising on a one-acre site spanning the 1400-block of Cook Street between Pandora Avenue and Johnson Street, the two-building, five and four-storey all-concrete low-rise will consist of 102 residences and approximately 24,000 square feet of ground floor retail frontage.

The Wade encompasses a full restoration of the five-storey 1950’s-era Medical Arts Building – designed by renowned architects John Howard Wade and Dexter Stockdill – together with a four-storey extension to the east and a new-build four-storey lowrise along Cook and Johnson streets.


Building on the storied past of one of Victoria’s most recognized examples of modernist architecture, the inspiration behind The Wade was a development mantra Tenfold Projects partners Max Tomaszewski and David Price say made an impact on the local market.

“Our forward-living development concept places human wellness at the forefront of what we do,” Tomaszewski says.

“We often forget in our society that our homes should enhance our health and when we launched sales with this concept the market responded. David and I are committed to pushing the boundaries of new home construction as it relates to health and wellness, sustainability and technology, and The Wade epitomizes that. Consider the benefits of using natural materials and finishings without odours from chemical treatments, the difference a gas stove makes to cooking your meals, or the energy savings of a thermostat you can control with your smartphone. The many unique aspects to our homes will make a tangible difference to the lives of each resident.”

Situated between both buildings The Wade’s foundation, literally and figuratively, will be in the form of a publicly accessible urban green space – the largest of its kind in Victoria – serving as a place of solitude in an otherwise bustling part of the city.

Above the streets, The Wade will offer a uniquely apportioned rooftop where residents will have their choice of a wildflower, vegetable, or herb planter managed on their behalf. And what is arguably a first on Vancouver Island, an apiary will draw pollinators to the planters and an accompanying fruit tree orchard. Residents will also enjoy a communal space for entertaining, a quiet zen garden removed from the rest of the rooftop, even a sauna with views onto the Olympic Mountain Range.

The project also gained notoriety for introducing market-leading incentives for first-time buyers working towards a home purchase. “With every Tenfold development we employ a limited number of zero-down, pay-as-you-go down payment options for first-time buyers. At The Wade 18 individuals were able to use this entryway into the market that allowed them to secure a unit with zero dollars at signing and monthly payments totalling a five-per-cent down payment paid over the span of 18 months,” said David Price.

And with Victoria’s real-estate market firing on all cylinders the equity for all buyers, whether first-time or not, has already increased by an average of $100 per square foot or $50,000 per unit.

“I can’t stress enough how much of an opportunity The Wade has been for our purchasers. The average increase in the equity of their homes already amounts to tens of thousands of dollars and in some cases is well over $100 per square foot. Now imagine having had this option as a first-time buyer and to now have the security of owning your own home. That’s the tangible effect of our program, and something that we will include with every project we bring to the market,” Price said.

With construction well underway residential occupancy is scheduled for the late spring of 2019. Interior demolition of the Medical Arts Building is nearly completed as crews work to reduce the building to little more than a concrete skeleton prior to the start of its restorative process.

Meanwhile excavation for the underground parking garage and the foundation of new-build four-storey wing continues on schedule despite a broken water main displacing the excavated pit’s concrete shoring along Johnson Street.

“The rupture of a water main alongside our south perimeter made for some excitement several weeks ago, but together with the City of Victoria we are working towards finalizing the clean-up. The good news is our construction schedule has not been impacted by the issue and this will actually allow us to immediately start construction of the parkade wall in lieu of re-shoring the site,” Tomaszewski said.

As for the opportunity to purchase at The Wade, the developers say that with any large-scale project some buyers may decide to walk away from their purchase due to lifestyle decisions. When rescissions occur, new buyers have the opportunity to step in.

“For anyone interested in a home at The Wade the opportunity to purchase may still materialize. Several units are bound to reappear, and we have held back a handful of units for friends and family, which if not taken we may release at a future date,” Tomaszewski said.

With sales at The Wade now wrapped up, Tomaszewski and Price are focusing their efforts on a new pre-sale opportunity along the shores of the Inner Harbour.

“All-concrete low-rise homes, a waterfront setting, and the same buyer incentives we introduced with The Wade,” Price says. “Westbay Quay is so much of what The Wade will be in the downtown core, albeit in an urban location that just screams west coast oceanfront living.”